The purchase of as much as $100 million of pork, $50 million of chicken, and $10 million each of lamb and catfish come on top of $30 million in assistance announced last week. Farmers and ranchers are struggling with the worst combination of heat and dryness since the 1950s, the administration said.

…More than half the counties in the U.S. have been declared natural disaster areas by the Department of Agriculture, and 69 percent of the Midwest last week had moderate to exceptional drought, government data show.

…Obama has pledged a wide-ranging response to the drought. His administration is giving farmers and ranchers access to low-interest emergency loans, opening more federal land for grazing and distributing $30 million to get water to livestock.

Okay – what is wrong with this picture.  So let’s add it up.  Farmers, Ranchers, whatever you call those who raise fish, etc.  getting government help to purchase their products.  Add on top of that the benefits that come with being declared natural disaster areas.  Not to cast a wide net here but I expect a good number of the states, and likely voters, where the loudest noise is based on a desire for less Federal Government in their affairs that are benefiting the most from yet another Federal program that takes my tax dollars and again bails out others who sit dramatically opposite my social and political leanings.  I’ll make it pretty clear – what I pay in Federal tax dollars hurts my brain when I do my taxes every year.  I see little of that back given my earnings have for years placed me outside of almost every break and benefit available.  That’s fine as I realize I get other benefits (but not from outside or government sources).  I don’t mind helping others that need help or are less fortunate but it does gall me to see all these people who are the first to shit on the Federal government and anyone who doesn’t believe in what they do or hold their values but yet they are the first to hold their hands out when times are tough.

Okay – now a little test – take a look at these next two graphics and tell me what looks surprisingly similar.  While not perfect, I will guess there is a bit of overlap in those states with the greatest drought conditions and the Red states. 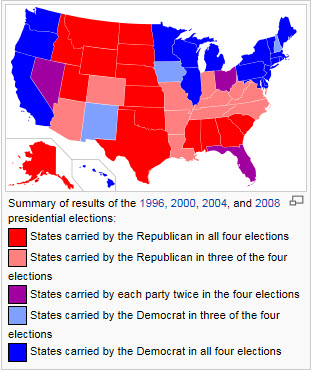 Now, if I can only figure out how to get my two acres here in Pennsylvania declared a disaster area.  Or maybe I need to start raising some livestock or fish out in the backyard.

Oh, and lastly, no sense of anything with Global Warming here.  Interesting, on the subject of that huge hoax of Global Warming – I did read a recent article in our local paper – which on occasion stumbles on some story of value – of course they took it from another publication in PA.  Seems we in the Northeast/Mid Atlantic are seeing some change in our weather – might explain where all that rain from mid-west is going.

Pennsylvania’s heaviest downpours have gotten wetter and more frequent in the last six decades, according to a report released by PennEnvironment.

Between 1948 and 2011, the state has seen a 52 percent increase in the number of “extreme” storms — those that are among the largest in the state in the last 64 years.

Large storms that used to happen once a year in Pennsylvania now happen every eight months, the report found. The amount of rain or snow in the largest storm each year has also grown by 23 percent over the same period.

The findings were based on data from the National Climatic Data Center collected from 3,700 weather stations across the country.

The frequency and severity of Pennsylvania’s storms largely matched the average increase of the Mid-Atlantic region, but surpassed the national average, the report found.

Maybe I should be looking for Federal Government flood relief aid….

2 comments on “Keep the Federal Govt away – unless it helps me out.”