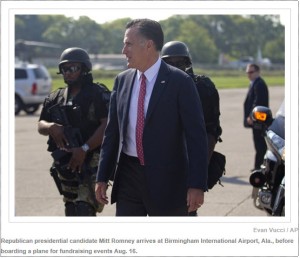 Mitt – at a fundraising event yesterday in SC. And he needs armed (in combat gear) security because? Maybe because he had a lower tax rate than most Americans over the last decade.

So Mitt shares he has personally gone back to review his taxes (highly doubtful) and he reveals that he has paid taxes contrary to the remarks made by Harry Reid.  Ok – but he also includes the fact that in the last 10 years, he has never paid less than 13% effective tax rate.  Could just be me but I can’t think that telling the America public that he has paid at an even lower tax rate than we all heard previously would seem to be a great strategic move.  I guess it is better than a situation where he paid no tax but not much.  His throwing in that if you count his charitable contributions, he is paying over 20% also doesn’t carry much weight for a couple of reasons.  First, if I recall correctly, most all his charitable contribution went to the Morman Church.  While it works for his church, it somewhat pales in comparison to actually helping others outside your personal circle.  Second, last time I looked, charitable contributions are a deduction from taxes so no matter how you looked at it, he didn’t pay 20% in taxes.  Lastly, giving to charity is a voluntary action.  Unlike, taxes which isn’t really a choice.  So when you add it all up, what Mitt pays falls into the same tax bracket for a single person making less than $35K.  Take a look – and these are for 2012 – obviously much higher than the last decade.  I know it is a bit more complex than this and that tax brackets don’t equate to effective tax rate but directionally not that far off considering his average annual income isn’t even in the six figure range.  Hell, I’m figuring I’ll need to be retired before I see that tax rate – mine hasn’t been below 24% in recently memory.

So, for being so stupid and trying to answer one problem by waving a flag elsewhere and actually pointing to another problem, I think it is appropriate tha Mitt get today’s “Head in the Butt” award – I think he should share it with his staff given it is obvious no one said “You know, Mitt, might not be a great idea to tell everyone you are actually paying even less tax”.

Mitt – take a bow – carefully…it’s one thing to have your foot in your mouth.