Good to see the real feelings and beliefs of the Republican candidate have leaked out.  Most of us that already sit on the other side have long figured out that the pandering and positioning of Romney and the others hide what they really think and more importantly how they really feel about most of the rest of America.  This latest debacle on the Republican doorstep where Mitt shares his real feelings that 47% of America lives on handouts from Government and they have no sense of personal responsibility and care for themselves (and never will) should really help with his struggling campaign.  He further denigrates these 47% by seeing them as non-thinking individuals who will automatically vote for Obama (not that the same phenomenon exists on his side of the aisle).  Given the number of senior citizens in that 47%, his expressed concern for that segment of the America also has to be questioned.  Despite the immediate push back from the Romney camp that this was all taken out of context, it is obvious we have a problem here with character and integrity – not new for politicians on both sides but one I think is critical as we look at who we want to lead our country into the future.  While many might not see this recent look into the real Republican agenda has anything to do with integrity and/or character, I would beg to differ.  Compromises in character and integrity have become more commonplace and people seem to be more accepting.  That acceptance is a problem in itself but that is a different issue.  Not an excuse, but I think most of America is just getting worn out.  If we can’t expect integrity from our President, then we are really lost.  There are alot of definitions out there but I found one that I believe is more contemporary and relevant to the world in which we find ourselves today.

Integrity is a concept of consistency of actions, values, methods, measures, principles, expectations, and outcomes. In ethics, integrity is regarded as the honesty and truthfulness or accuracy of one’s actions. Integrity can be regarded as the opposite of hypocrisy, in that it regards internal consistency as a virtue, and suggests that parties holding apparently conflicting values should account for the discrepancy or alter their beliefs. (From Wikipedia)

I would suggest the following quote might be relevant here.

“In looking for people to hire, you look for three qualities: integrity, intelligence, and energy. And if they don’t have the first, the other two will kill you.” – Warren Buffet

I think this might be the core of Mitt’s struggle to connect with the most of America.  He rarely feels or looks real.  In looking at this recent video where he basically dismisses half of America, he actually appears to be pretty real and honest.  Those words flowed rather easily out of his mouth and he needed no notes.  His life experience has provided him little opportunity to understand the 99% and his voice to the contrary doesn’t ring true.  I’m guessing his inability to move that “Likeability” needle is rooted in his issues with integrity.

Sorry Mitt – it’s really about what you say when you think no one is looking – worse because you are stupid enough (or pompous enough) to think it wouldn’t happen.

The reputation of a thousand years may be determined by the conduct of one hour.  ~Japanese Proverb

Ricky – doing his Stan Laurel imitation (look it up)

On another note, we are privileged to have Ricky Santorum back in front of us to remind us how big an idiot he really is (as if we need to be reminded).  Thanks to my son for passing this along.  At the Values Voter Summit in DC this past weekend, Ricky shared these thoughts –  “We will never have the media on our side, even in this country. We will never have the elite, smart people on our side – because they believe they should have the power to tell you what to do.”

Good to see he agrees with what we all knew.  Wonder if anyone in the audience realized they weren’t included in with the smart people.
At least two-thirds of our miseries spring from human stupidity, human malice and those great motivators and justifiers of malice and stupidity idealism, dogmatism and proselytizing zeal on behalf of religous or political ideas. – Aldous Huxley

Overall, we all know that Mitt has a problem with his Likeability as he trails Obama by over 23 percentage points in the most recent Gallup Likeability Poll.  Not sure why that is any surprise given the way Mitt manages to portray himself to the American public.  Could just be me but Mitt’s efforts to downplay his stature well up near the top of the 1% don’t seem to resonate with him being common folk.

That doesn’t mean he hasn’t tried to relate to the rest of us.

Highlighting he hasn’t paid less than a 13% effective tax rate in the last 10 years was no doubt an attempt to show his sharing the same tax bracket as those common folk making $30K or so (at least the single filers – maybe $80K for those married).

His visit to a hardware store in New Hampshire – when asked what he bought, he quickly offered “hardware stuff” – probably to use when he has to do “stuff” around the house.

As he shopped at a grocery store, also in NH, he offered he was going to be doing the cooking that evening and that he had some people coming over.  I guess someone should have informed him that the two ears of sweet corn that he picked up from the stand outside the store would likely fall short in terms of helpings – or maybe he was going to break those ears into several portions – just like the common folk do.

In trying to make connections and show he was one with the myriad of NASCAR fans, he shared that “My friends own NASCAR teams”.  I’m sure we all have friends like that.

Like many of us, the Romney’s own a horse.  We did for a good number of years.  What I missed was anything close to the $77K tax deduction Mitt managed to get for Ann’s dressage horse.  Actually, it wasn’t that my deduction wasn’t close, I never got a deduction.

One of my favorite of Mitt’s attempts to relate to the public was on an early campaign stop in Michigan.  “The trees are the right height,” he said in Michigan, trying to show his love for his native state.  I know I comment on the height of the trees in Pennsylvania all the time.  Is Mitt intimating that Michigan trees are somehow better than trees in other states?

Okay, while not really seen as likeable, Mitt does get the nod when it comes to how people see his ability (vs. Obama) to fix the economy.  Here he beats Obama 52% to 43%.  Of course one key way he will carry out that fix is his management in taxation of Americans.  Oh, Wait – something looks askew… 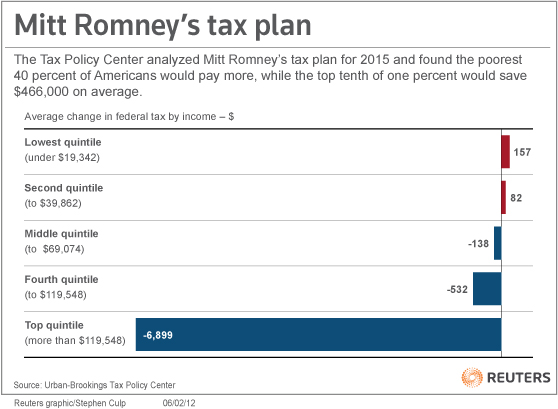 Undoubtedly looking out for the common man!

Before I go, I can’t ignore another bonehead move by Mitt.  Again showing he is relatively clueless about what he should say and how it makes him look, he cracked a joke about his own birth certificate while campaigning Friday in his native Michigan. “No one has ever asked to see my birth certificate,” Romney said. “They know that this is the place that we were born and raised.”   Given his Likeability ratings among Americans, you would think he would think twice about a comment that immediately puts him alongside one of the biggest assholes ever to grace corporate America – Donny Trump. 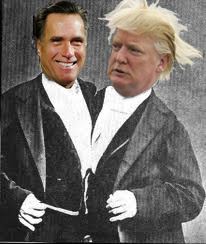