I have now watched for I don’t know how many years, a Democratic Party which falls on the side of decorum and maturity when it comes to dealing with issues Americans as well as with the Republican Party. For those of us with better upbringing, more education and likely more success in life, this is typically how we try to approach others in our day to day dealings – whether in our workplace, our families and those with whom we must interact out in the real world. Not to say that all Republicans are lowlifes (most are), are uncouth (most are) and are uneducated (they are). Doesn’t mean they are automatically bad people but if I was gambling, that’s where I’d put my money. The list is long but one can only look at the current crop of Republican politicians – MTG, Boebert, Gaetz, Jordan, Rand Paul and others – for so long without seeing them for what they are – Republicans with no substance and little to offer – hence their style of interaction. Their approach – make enough noise and stir up enough emotion that their base doesn’t question content.

I watched the beginning of the Congressional hearing on the ending of the war in Afghanistan and the subsequent evacuation of over 130,000 Americans, Afghans with SIV papers and citizens of our allies. Of course it immediately dropped down to the juvenile level upon which the Republicans now focus their criticism – which is pretty low. I will likely at some point take up some of the good, the bad and the ugly of the end of the war in Afghanistan but for now I’m pissed enough to just focus on the Republican party and their ongoing work to bring this country to its’ knees. Kind of like what we say when some fool starts to argue with you and their only defense is to bring you down to their level of incompetence or idiocy. Again, anyone reading my blog for any period of time can see how I view most all of this current batch of Republicans in office – whether at the Federal, State or local levels. As we often have heard (but maybe in different terms) shit rolls downhill.

What we all know is that this is the Republicans crap we will continue to have to listen to for the foreseeable future. Nothing will change them – our only hope is that many of them – actually the majority of the unvaccinated – continue to die from Covid. And hopefully in the most painful and horrific ways so their loved one can continue to reach out and ask for your thoughts and prayers. No issue giving them my thoughts – Get Fucked. I’m always up for efforts to cleanse the gene pool.

But enough on the Republicans. My issue at this moment are the Democrats and how they continue to play nice and take the high road. While it might sound good and it might look good on paper, at this point it is a losing proposition. In my many years in Corporate America – not always the friendliest place, especially when providing services to clients that they pay a lot for. You can try to be cooperative and patient as you help them see the error of their ways and expectations but there is a point where they need to know there is a line – and a point where once they cross, they can never come back to the same place and get the benefit of the doubt like all is forgotten. I always felt there was a time where you needed to not only provide the proverbial 2×4 to the head but you needed to make sure there was a welt that lasted long enough they never forgot the initial swat. In fact, kind of like with your kids, there should be some fear always left in them for future encounters. They need to know you are not just fucking around. It is time the Democrats in our country step up the swats to the heads of the Republicans that continue their assault on not only the Democrats in power but in ALL the non-Trumpers in America. Can’t say I agree with everything that Bernie, AOC and Nancy Pelosi say and do but I will tell you I like their style. I like Schumer but he is a bit more of a “get along” guy. All the Democratic leadership needs to take the hardline stance and pretty much rip some heads off. They need to set the tone of fixing the immediate problem rather than worrying more about pissing people off and impacting their re-election. With a continued stance of not rocking the boat, I think they put their re-election more at risk.

Enough noise and bullshit from the Trumpers – we know they are assholes and barely can walk upright (my apology to the primates) but we need to make it very clear we don’t want to hear from them. Vermectin for all of them. I’ll fund enough for the first 1000.

There are times that stretch one’s imagination when you have to wonder how far out of touch an individual (or even a group) can be from reality.  I’d like to say that today was one of those special days but, to be honest, there is no dearth of days where it is relatively easy to find one of those special people.   Looking back just a few months, it was Ricky Santorum who could be counted on to get the “Head in the Butt” award. Unfortunately (not really), he has pretty much disappeared from the public eye so it is time to look for other deserving souls.

Today, there was one obvious person who has positioned himself as an obvious contender.  A man who has continually stepped up to become a folk hero to those who have obviously lost their way – the Tea Party.  He continues to demonstrate phenomenal short-sightedness and baseless self-importance.  Aside from trashing the Supreme Court today for their decision on the Obama health care law, he gets this award for his continued attempts to basically blackmail the Senate by halting bills that are actually relevant and important with amendments that have no bearing or relationship to the issues at hand.  Paul has repeatedly insisted that Senate leaders schedule votes on amendments he’s pursuing on issues such as abortion or gun rights — or he’ll delay major, bipartisan legislation.  This week, Paul demanded a guaranteed vote by the Senate first on defining life as starting at conception, as part of a bill renewing national flood insurance.  Will this bring the country to its knees?  Not by a long shot but it is one of the reasons that Congress has an approval rating barely above 10%.  Without question, Rand Paul gets today’s “Head in the Butt” award. 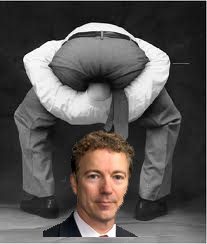 For all those who might take offense and feel this is a bit over the top, I would submit that you too have likely made that journey where things look bleak and it is time to return to the past.  For those, I offer this thought –